Dave Grohl grew up in Springfield, honed his rock sound at local venues, and hit it hard. Now he’s also an author.

Former Springfield resident Dave Grohl rose to prominence as a rocker with the Foo Fighters in the 1990s and now, 31 years later, he still tops the charts. Grohl’s most recent bestseller, “The Storyteller: Tales of Life and Music,” joins his list of accomplishments alongside grunge rock and several documentary films.

Her book is currently a finalist for Audiobook of the Year. 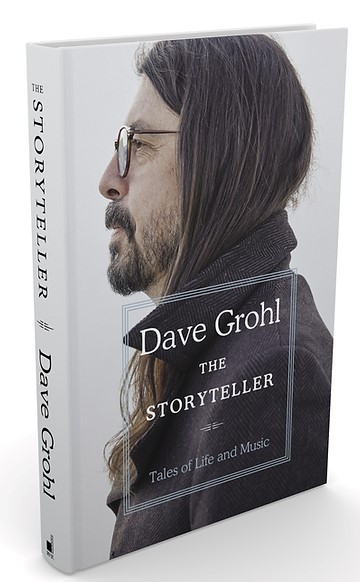 “I’ve never really been one to collect stuff, I collect moments,” Grohl said, in a video interview that can be found on her book site. He had plenty of time to think about those moments when the pandemic hit a few years ago, so he jotted them down and now has a bestseller. “I suddenly had nothing to do,” he said, but noted how satisfied he was to collect all those memories for the book.

The long list of book reviews is positive. “Candid, humble and full of big star stories,” CNN said. “Grohl, of Nirvana and Foo Fighters fame, demonstrates the bonhomie he’s known for in this heartfelt standout that explores everything from the loss of Kurt Cobain to the road to fatherhood,” Audible said. “Combined with his bubbly wit, that humility is what makes Grohl’s moving story a cut above typical rock memoir. There’s not a dull moment here,” Publishers Weekly added.

The spark of creativity may have struck him in Springfield. As a child, Grohl lived in the part of Springfield inside the ring road near North Springfield Elementary School where he started school. When he entered high school, he attended Thomas Jefferson High School for Science and Technology, Annandale High School, and Bishop Ireton. He played in local bands like Freak Baby, Mission Impossible, Dain Bramage and Scream, at the Lake Braddock Community Center where some say he met Kurt Cobain. Grohl dropped out of high school in the mid-1980s and came out to hit it big after that.

In the book, he talks a lot about his experiences in North Springfield. In 1982, he was entering eighth grade at Holmes Intermediate School when he broke his ankle playing football on a field near Accotink Lake. There’s also a chapter about a seance he held to bring back the spirit of John Bonham, the original Led Zeppelin drummer who died in 1980 just before they had a show at the now defunct Capital Center in Maryland. They had everything set up with candles and such, in the carport of their house.

During a concert at the Capital One Arena a few years ago, Grohl mentioned playing video games at Timeout 1 and Timeout 2, arcades in Springfield Mall that were hangouts when he was growing up.

While the 1990s were all about his sounds with Nirvana and Foo Fighters, this also evolved into his work with film. In 2013, Grohl was the director/producer of the documentary “Sound City”. This was the Van Nuys CA studio where Nirvana recorded Nevermind in 1991, which sold millions “and transformed the modern musical landscape”, critics said.

It’s been a busy past few weeks for indie rock icons Built To Spill, and there’s no respite in sight for the rest of the year. The Boise, Idaho band, fronted by guitarist and vocalist Doug Martsch (the only original member remaining), just wrapped opening a few gigs for New York punk legends Jawbreaker, marking […]

At the turn of the 1980s, the Pretenders announced themselves to the world with what is widely regarded as one of the greatest debut albums of all time. They solidified their status as one of the most exciting bands around with their follow-up album “Pretenders II”, which celebrates its 40th anniversary this year. In November, […]

Punk rock has always been the hot-tempered, bratty young cousin of the rock family. Born out of a disregard for almost everything that happened in the 70s, it became the movement for disenfranchised and alienated youth. Defined by simple three-chord songs – played with speed and animosity – it defied the conventions of popular hard […]